She wants to ensure people living with disabilities have a chance to live their best lives.

Judy Noon, a resident of Jacksonville, FL, discovered ECAD through the pages of “Until Tuesday: The Story of a Wounded Warrior and the Golden Retriever Who Saved Him.” She would go on to become friends with author Luis Carlos Montalvan and Service Dog Tuesday.  And become a knowledgeable person about the world of Service Dogs and the people who train them.

Judy is a person who feels she must give back. She’s made the decision to give to ECAD during her lifetime, and to remember people living with disabilities after she is gone.

How did you first hear about our organization?

But I actually first heard about ECAD when I read Until Tuesday soon after its publication. A friend of mine had been in Costco and, knowing how much I love Golden Retrievers, she gave me the book. I just had to meet Luis and Tuesday.

A friend found Luis through LinkedIn and I asked him if he would be the guest speaker at a fundraiser I was doing for No More Homeless Vets in Jacksonville where I live.

Luis and Tuesday accepted the invitation, with Luis saying they would be honored.  The event was a success Luis and I became friends. He taught me a lot about Service Dogs, about the military, and about life.

Luis gave me friendship, love and a purpose.

When I met Lu at Madison Square Garden, I could feel the compassion within her that let her do what she did for Tuesday and Luis. 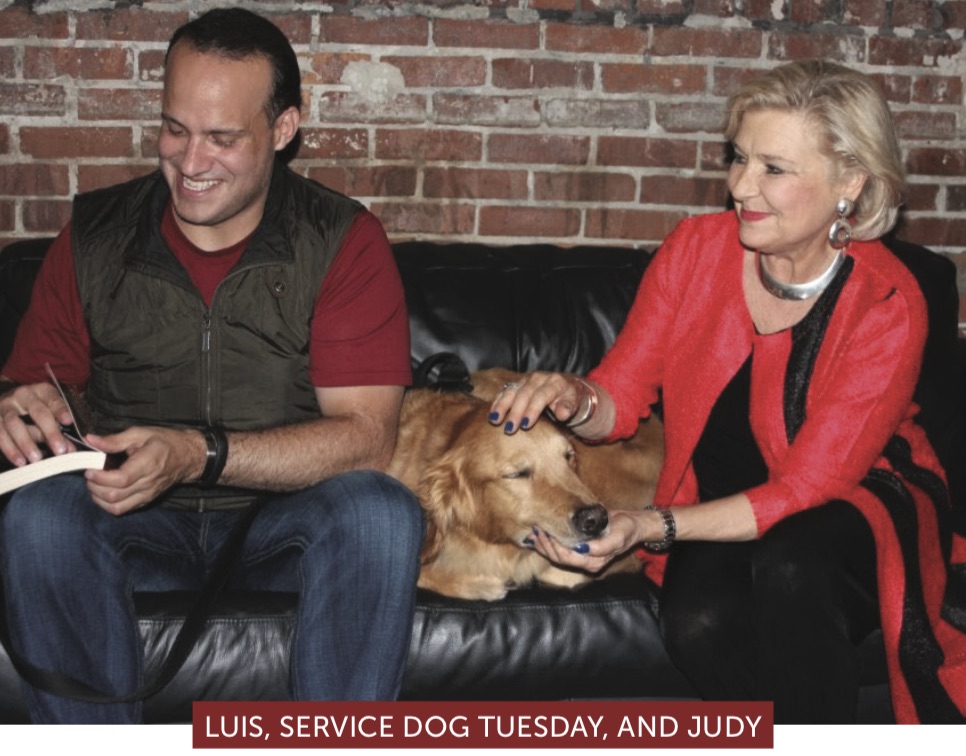 What made you decide to give your first gift?

I knew about Guide Dogs – but the world of Service Dogs – and ECAD – was something different. When I saw what these dogs, dogs like Tuesday, could do for someone, well, I just had to get involved. It made me want to do something.  My mother was a perennial volunteer and she inspired me. I know that I am someone who wants to, needs to, give back.

I also have a friend with MS and I learned she had a Service Dog, so I am tickled pink that I can feel useful by helping an organization that will place dogs with someone like my friend.

And I saw Tuesday’s skill set come into play during another event, at a library where he and Luis were interacting with children. Luis was reading from one of his books and Tuesday was off to the side.  All of a sudden, Tuesday came rushing over, and Luis got very concerned as he knew he wasn’t having a panic attack. He noticed that Tuesday was concentrating on one little girl in particular.

Luis asked her if she suffered from seizures. The girl said yes and Luis told her that she should find a chair to sit in and be safe. She soon had a seizure but she was sitting so she didn’t fall and we were able to help her. Tuesday knew and went into action. He knew to warn her.

Why do you enjoy giving to ECAD?

I know a lot about other organizations, Best Friends for example. I’ve researched them and donated to them.  I choose to give more to ECAD because I feel I can be a part of the change in what they do as they grow. I will have a greater impact. It is more intimate. And when I send a donation, I know it will not be received as just another envelope in the mail.

What inspired you to make a legacy/bequest gift?

I visited ECAD in 2017 when I went to Pace University for Luis’ Memorial Service. The new training center was just a hole in the ground at the time.  But, I recognized that Dale and Lu had ambition and were determined to find a way to help more people. By giving to ECAD, it was the closest I could get to being a part of that drive.

I went back to ECAD last year so I could visit Tuesday and Gordon and see the completed facility. I felt a part of it.

What do you hope to accomplish through your philanthropy?

I don’t have children and I would rather give to a place that involves dogs than to a museum.  It helps me fulfill the commitment that I felt in Luis, to “be the change.”

What would you tell someone about giving to ECAD?

Giving to ECAD allows me to fulfill the sense of purpose I got from meeting Luis and Tuesday, to continue as best I can what he was trying to do in his advocacy.

Having a dog lick my face occasionally is all the gratitude I need.