How to Help Veterans: Service Dogs Can Improve and Save Lives

Military personnel who have served in combat are vulnerable to its consequences, including physical and mental damage. They return from battle, having their lives forever altered, often in extremely challenging ways.

The psychological, physical, and emotional impact of war can be devastating, forever altering the lives of those who served. Over the past 20 years, more than 1.9 million United States military have been deployed in three million tours of duty lasting more than 30 days as part of Operation Enduring Freedom (OEF) or Operation Iraqi Freedom (OIF).

The effect of war on military personnel is well-documented. Injury, sexual violence, malnutrition, illness, disability, post-traumatic stress disorder (PTSD), depression, Traumatic Brain Injury (TBI) and anxiety are just a few of the potential ramifications. For example, as many as 30 percent of veterans from Iraq and Afghanistan have been diagnosed with PTSD. Yet only about 40 percent of those individuals ever seek help.

While various sources of help are available for injured vets, introducing a companion with four paws, a wet nose, and very specialized training has proven to be particularly effective. But make no mistake, regardless of how adorable those furry friends are, they are working.

Veterans who utilize service dogs report multiple benefits, including lower levels of depression and anxiety, fewer hospitalizations, and a reduction in medical and psychiatric costs, among other benefits. These highly-trained canines offer help to:

A service dog specially trained to help vets helped Charlie Hernandez, a US Veteran, manage his PTSD and also helped him when he developed other health issues. Another vet, retired Lt. Col. Michael Zacchea, battling PTSD and a traumatic brain injury, found life-saving assistance from his service dog. Both received their service dog through Project HealⓇ, one of Educated Canines Assisting with Disabilities (ECAD) services. 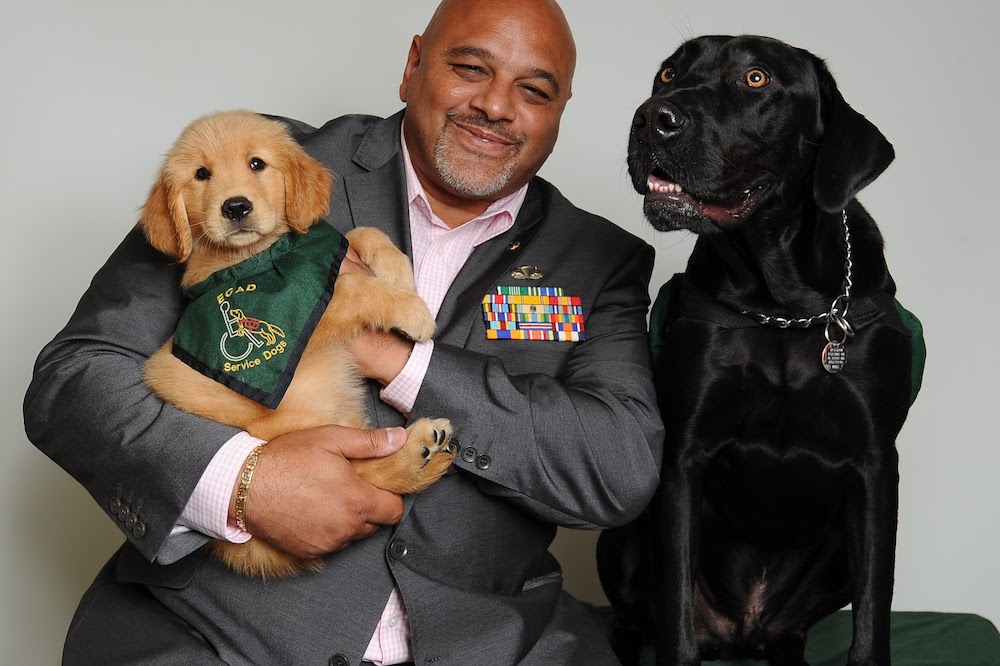 When a military family member sustains an injury, it can also be life-changing for other family members. Research on how a service dog can help with relationships found that partners reported improvements in veteran functioning, family relationships, and quality of life.

The repercussions—chronic pain issues, PTSD, misuse of medication, traumatic brain injuries, financial issues, family problems, combat experiences, or a combination of these—can place veterans at an increased risk for suicide. In fact, in 2017, veteran suicide rates were 1.5 times the rate for non-veteran adults. Over the past 12 years, nearly 79,000 veterans took their own lives, and the number of veteran suicides has exceeded 6,000 per year every year for the last nine years.

Emerging scientific research conducted by Purdue University College of Veterinary Medicine found that veterans coping with PTSD performed better on various mental health and emotional well-being metrics. Those metrics would include reduced symptoms of PTSD and depression if they were paired with a service dog. Veterans with service dogs also missed work less and performed better while there than their dogless counterparts.

Another Purdue study measured the stress-mitigating hormone cortisol in PTSD veterans with and without service dogs. Those with service dogs produced more cortisol than those without, mimicking the amount expected in adults without PTSD. Those in the service dog group also reported less anger, less anxiety, and better sleep. While these studies don’t directly correlate with suicide, they suggest significant promise for suicidal vets with mental illness.

Unfortunately, waiting lists for veterans in need of service dogs are long. The good news is that you can help make it possible for vets with combat-related physical or mental health disabilities, including amputees and those who have PTSD and traumatic brain injury (TBI). There’s no better way to show your appreciation to the men and women who serve our country.