A Canine Bundle of Joy

When humans give birth to multiple babies, people reflect on how much more work it is than dealing with just one baby. In the canine world, puppies arrive in litters of eight to twelve puppies. It’s rare when a dog gives birth to a single puppy, called a “singleton.”

The uncommon occurrence recently happened at Educated Canines Assisting with Disabilities (ECAD) when they welcomed a singleton puppy, Golden Delicious, or Gold for short. The adorable singleton meant that ECAD puppy instructor Christina Canaletich had her hands full. While you might not see Golden, viewing these adorable puppies on the ECAD Puppy Cam will make your day! 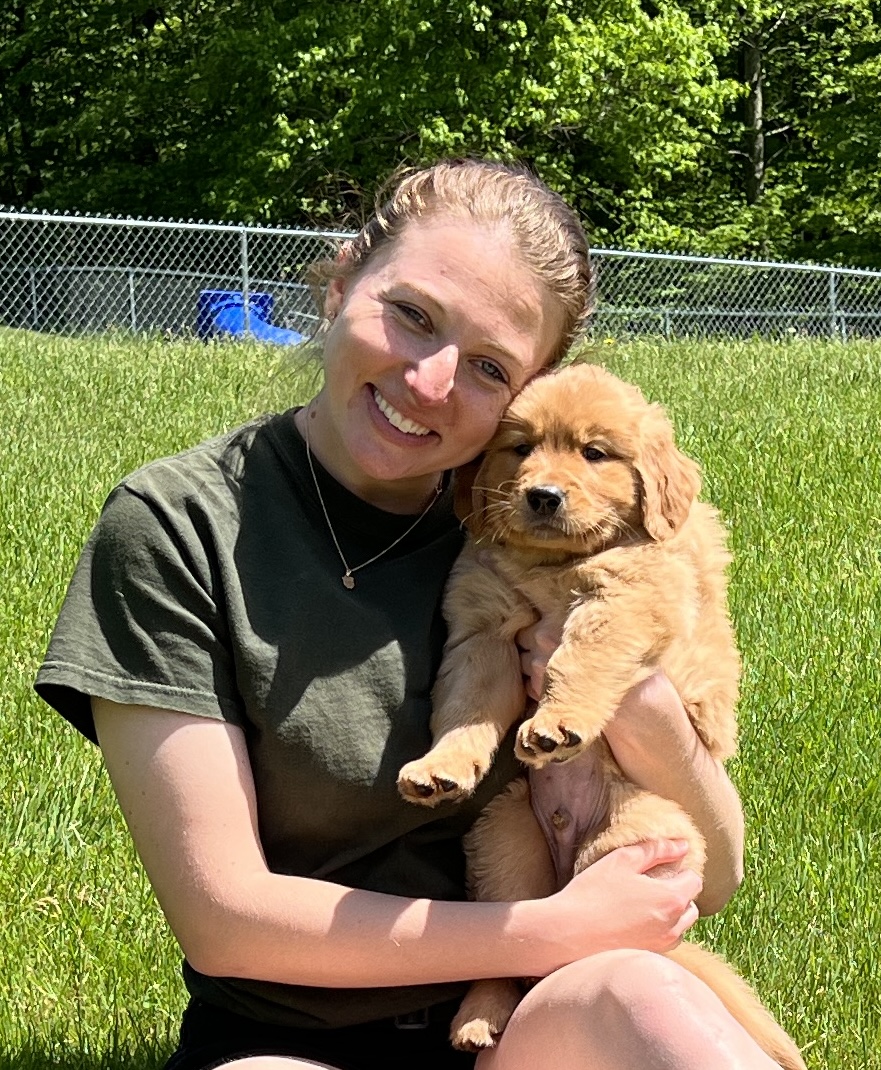 The Challenges of a Singleton

From the start, singleton puppies have a lower chance of surviving birth. If they are alone in their mother's womb, they do not have to share any nutrients while growing and will sometimes grow to be too big. In addition, the mother can have trouble delivering the puppy or not produce enough of the hormones needed to go into labor. Even if a singleton makes it through the birth process, it can still be at risk for other health and behavioral issues.

Since the puppy doesn’t have to share nutrients and has all the milk to itself, even after birth, it can grow too fast. Their muscles may not be able to support them, making it difficult for them to learn to stand and walk, which can lead to joint issues and physical therapy needs later.

Fortunately, Golden and mama proved to be a dynamic duo. They overcame many odds together and had a successful birth without health issues.

The lack of socialization with other puppies can lead to behavioral  problems. For example, they can have bite inhibition because they don't  learn to bite softly or   play-bite. In addition, since they’re alone, they may  have touch sensitivity and not be able to handle themselves appropriately  in social situations.

Discipline issues can arise with singleton puppies because of their lack of social cues. If not socialized properly, they can be more aggressive, anti-social toward  other dogs, or unable to handle frustration.

Due to the potential health, behavior, and discipline issues, a singleton puppy may not seem like the best fit to be a Service Dog. However, the ECAD puppy instruction team keeps a close eye on Gold to ensure they can catch any issues early and develop solutions.

Christina and her team of volunteers took innovative steps to replicate the social interactions observed in other puppy litters, being careful to differentiate between human socialization and puppy socialization. For example, they used their hands to provide human socialization, but stroked him with soft toys to resemble the feel of other puppies. The ECAD staff and volunteers employed other creative accommodations at  different stages of Gold’s development.

Puppies cannot hear or see for the first three weeks of their lives, making their sense of touch and smell the most active. So, the team simulated the feeling that Golden was around other dogs in various ways. For example, they placed a small, plastic vibrating toy heart to replicate a heartbeat in stuffed dog toys, constantly moving them to be on top of, underneath, and around Gold.

In addition, a heat lamp was used to keep him warm and to warm blankets and towels for him to climb over as if he was climbing on top of his brothers and sisters. The team also used heavier toys and placed one-pound sandbags in a sock to lay near and on top of him so he would feel like another puppy was lying on top of him. In addition to making him feel like he was part of a litter, the tactics helped ensure he wasn’t overly sensitive to touch.

Once the singleton puppy got older, walked, and could see and hear, the team worked to ensure he got plenty of exercises to keep his muscles strong. For example, they created little obstacle courses that encouraged the puppy to climb over some toys to get to his mama or the puppy instructor. In addition to providing a fitness routine for him, it taught him that he had to work to get things he wanted.

Once vaccinated, Christina introduced him to other small dogs. Fortunately, as a Service Dog organization, there are other dogs available at ECAD. As a result, Gold met other dogs at a young age, which helped avoid potential behavior issues. 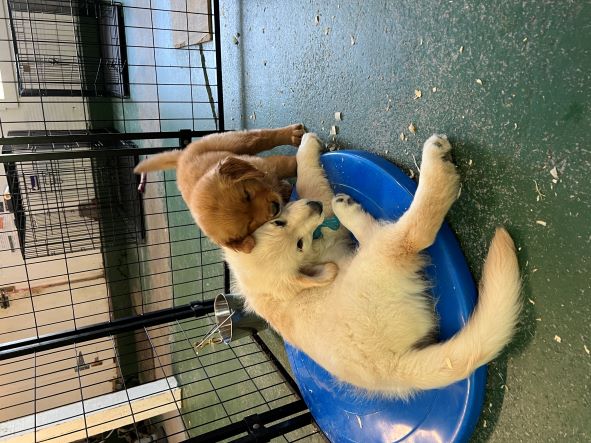 The team socialized Gold with other dogs slowly, and there was a lot of hesitancy. For example, he was comfortable approaching them, but he would run away if they moved quickly in his direction. He also had trouble controlling his frustration with them. For example, if one of the dogs pinned him down, he immediately took the offensive and would snap at the dog instead of whining to tell the other dog he was uncomfortable.

But the team didn’t give up and continued pairing him with different playmates. Over time he got much more comfortable around them, and they all helped teach him. He no longer  runs away from dogs and now plays with them appropriately.

Christina and the team are so proud of the progress Gold has made. Although still a puppy in his peak socialization stage, it will be exciting once he is an adult dog to see if growing up as a singleton puppy impacts his behavior and ability to be a Service Dog.

The Incredible Impact of Service Dogs

It’s impossible to overstate a Service Dog’s impact on the lives of people living with disabilities. Service Dogs help with everything from daily tasks to performing life-saving functions.

Learn first-hand about the invaluable work of Service Dogs and how they transform the lives of people with disabilities. Your support makes it possible for ECAD to offer various programs. For example, Project HealⓇ delivers hope for veterans ​​suffering from combat-related physical and psychiatric disabilities. In addition, Canine Magic enhances physical   safety for children with autism, and Open Doors provides Service Dogs and Skilled Companion Dogs for those in need.

The cost of care and training for Service Dogs is high. Thanks to our supporters, we can provide Service Dogs to those who need them; however, the waitlist is long. There are several ways to change the life of someone needing a Service Dog, including cash donations, bequests, planned giving, and providing supplies. Even sharing this blog could help!