Dale comes from a large farming family in the northern part of Maine. When he was nineteen, he left for Connecticut with a high school friend and found work in the iron industry. He also found his soon-to-be bride, Lu. They were soon married and had two daughters while traveling for Dale’s iron work.  Four years later, Dale and Lu came back to Connecticut and began working for his brother-in-law’s highly successful software company. While Lu loved her position managing the warehouse and distribution, Dale dreamed of having his own business. In the years to follow, Dale would own and operate two very successful delis in the Granby, CT area and start his own landscaping business. However, when Lu’s father came to live with them, her passion for educating both children and dogs to help people living with disabilities became his own. In 1995, Dale began converting their home in Torrington, CT into kennels and office space, repurposing materials from the existing structures. He did this, not knowing that his hand-built space would transform into the volunteer and awareness hub that is the present-day Laura J. Niles Breeding and Volunteer Center. Dale has made ECAD his supreme labor of love, and continues to do so each day. 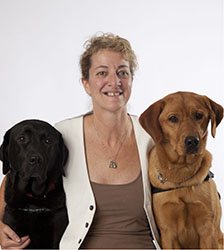 Prior to founding ECAD, Lu helped several businesses in their startup efforts and gained experience in business and administration. Though a native of Connecticut, Lu has also lived in Arizona and traveled the country extensively.  When Lu’s widowed father suffered a debilitating stroke in 1992 and came to live with them, she quickly recognized that he was becoming more depressed and angry, as he had to rely on someone else for his every move. Lu has a gift of being able to assess the possibilities, the potential of a situation. So, she looked at her Dad, and she looked at the family dog, Jules (short for Juliet.) The leash was in her hand. She pulled, Jules pulled, natural to both woman and dog. Within a short time, Lu had educated Jules to respond to her Dad’s tug by pulling him up to his feet. Then they would walk together. Or maybe Jules would retrieve a favorite magazine or just lie nearby, inseparable from Lu’s dad. To complete the picture that was forming in Lu’s mind, she found that her daughter, who had a learning disability, had no trouble in training Jules to do more and more things that would help her grandfather. In fact, the process was therapeutic and a great confidence builder. The stroke suffered by her father and the frustration her youngest daughter was feeling, drove Lu to find solutions.  And, ECAD was born out of that drive, passion and need.  Lu and her husband, Dale worked tirelessly researching, networking, following lead after lead to build ECAD into the organization it is now.  Lu sees every placement as a remarkable success for the Client, the student-educator and the organization.

Lee developed PTSD as a result of her work experiences as a Police Officer. Her research into Veterans with similar disabilities led her to ECAD where she began volunteering in 2010. Lee and her Service Dog Brady graduated Team Training in 2011. As part of her volunteer work, Lee has been the go-to person for ECAD’s social media presence and has been responsible for the addition of thousands of new FaceBook and Twitter followers. In 2013 she joined the staff and has been working alongside Lu. Lee’s favorite thing “ is being able to work with clients and the dogs, watching them grow together as a team and making a huge impact in each others’ lives.” Her favorite quote is “you can’t always get what you want but, if you try, sometimes, well, you just might find you get what you need.” Lee is a life long New Yorker and proud of it.

Lia completed Train the Trainer in August 2011 and began her career at ECAD soon after. She loves “that ECAD’s programs reach such a wide variety of people. The students, clients, volunteers, and staff each have their own unique paths that led them to ECAD. … and ECAD allows their stories to weave together to achieve a common mission. …. I love the pride on the student’s and volunteer’s faces when they watch a dog they’ve taught helping its client.” In the few years that Lia has been at ECAD, she has witnessed the commitment of the volunteers as they have kept their canine charges through blizzards and hurricanes. Lia loves traveling (as demonstrated by the fact that she spent 3 months in South Africa raising orphan baboons), reading, all things beach related, and learning new things. Her favorite quote is Emerson’s “The purpose of life is not to be happy. It is to be useful, to be honorable, to be compassionate, to have it make some difference that you have lived and lived well.” Lia has a Masters Degree from Columbia University with a Major in Public Health: Sociomedical Sciences and a Minor in Social Science Research.

Adam graduated from Train the Trainer in August 2011 and joined ECAD’s staff in September. Immediately prior to coming to Dobbs Ferry, Adam had been living in Israel where he had become attracted to Animal Assisted Therapies and began training as a Therapeutic Riding Instructor. In looking to broaden his experiences in the field “ECAD’s Train the Trainer Program stood out”. Adam says that his favorite aspect of his job “ is working with a team of professionals who positively impact the lives of so many people, in particular, the clients and students I teach.” Prior to devoting his time and energy to Animal Assisted Therapy work, Adam put his other talents to use as computer instructor, kindergartner teacher/science coordinator and professional photographer. His hobbies are scuba diving and cycling. Adam received his Masters Degree from Sarah Lawrence College with a Major in Education/Computer Science and a Minor in Marine Biology. 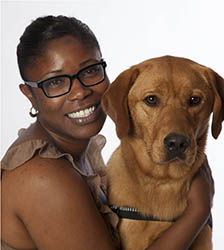 Leslie was introduced to the organization many years before her work with ECAD began.  While attending Quinnipiac University and majoring in Public Relations, she approached her classmate (Carrie Picard) to do an internship with ECAD as part of her coursework.  ECAD was just beginning then, but she saw the “immeasurable potential and worth in its mission”.  Ten years later, in 2012, when she returned to Connecticut after living in rural New Mexico for some time she re-introduced herself to the organization by volunteering for the Marketing, Development & Communications Department. A few short months later, she took on a full-time staff position in order to dedicate more time to furthering ECAD’s mission.  She loves that her work “contributes to improving the quality of life for both the Clients and the student-trainers” as well as her own.

Carrie is both an imaginative leader and a creative doer. She joined ECAD’s marketing department in 2010 when the department was in its earliest stage. Having worked for ten years in the corporate offices of Stop & Shop in Boston she had the experience and the skills needed to enable ECAD to expand even more. She transitioned to her current position in 2012. Carrie has played a dominant role in helping ECAD become a recognized force in the Service Dog field through a powerful, informative social media and public relations presence. Her team produces highly selective direct mail pieces and email blasts that highlight the lives of ECAD’s clients as well as the importance of the donors without whom ECAD could not exist. All material is designed in-house. These efforts result in ECAD meeting its’ annual operation budget. Carrie and her team are also capable of turning on a dime to meet all requests. "I love being the catalyst that brings those who want to help people with disabilities and those who need it together!"

She is a graduate of Quinnipiac University with a Bachelor’s Degree in International Business.

As the eldest daughter of ECAD co-founders Lu and Dale Picard, Carries takes pride in “seeing my parents’ passion becoming my own and being dually vested in the organization not only to further their dream but to further my own of being an advocate for people living with disabilities”.