A Window into ECAD Team Training

Many of us have been lucky enough to have a dog that’s more than just a pet — they’re our companions, our confidants, and our family members. But for people like Lyllyan Blare, dogs can mean so much more. They mean independence, confidence, and opened opportunities. Thanks to Journey, the Service Dog she was paired with through ECAD, Lyllyan has overcome seemingly insurmountable obstacles and has found herself capable of more than she had ever imagined. Like millions of other Americans, Lyllyan suffers from a chronic illness that impedes her ability to complete basic tasks on her own. A single mother, Lyllyan found herself depending on her six-year-old daughter more than she wished.

“That’s not a child’s role,” says Lyllyan. “I wanted her to have a more playful childhood and have a reprieve.”

When Lyllyan’s doctor first suggested paired with a Service Dog, however, she was unsure that it was the right direction for her. She feared that caring for the dog would take a toll on her body and that the added responsibility would wear her out, considering the fact that she endures chronic pain and doesn’t take narcotics. She feared, too, that the dog simply wouldn’t be as effective as she and her doctor were hoping.

“This wasn’t something I thought I needed. I wasn’t educated on how helpful Service Dogs can be. I didn’t realize the scope of what they are trained to do.”

Still, Lyllyan decided it was worth a try. She applied to eight different programs, and ECAD contacted her with a request for an interview. She traveled from her Nashville home to Connecticut with her Mom, growing increasingly excited to join a community of people with whom she shared some common experiences. She joked that, for once, her mom would be the one who stuck out of the crowd.

She soon found that her premonitions about finding mutual support were right. Upon arrival, Lyllyan met a woman whose story she had read through ECAD. Lyllyan had donated to this woman’s fundraising campaign, and the woman had, in turn, donated to Lyllyan’s. They found out they were in the same class at ECAD and became fast friends. The Service Dogs they ended up being placed with were brothers.

Encouraged, Lyllyan began the training process. For the first few days, she and the other applicants each worked with several different dogs, learning how to work with their canines and give them commands. After some trial and error, Lyllyan was paired up with Journey, and found that he listened to her.

Lyllyan chokes up remembering these formative days. "Team Training is very emotional. I remember looking at Journey at one point. I was on a walk with him. I realized that all of the things I had struggled with, and all of the abilities that I was losing — all of that was coming to an end and he was the catalyst for that. He was going to be this partner for my life, and was going to aid me, both in ways I expected and ways I didn’t expect … Things that were so hard, things that my daughter had to help me with — this dog was giving his life to me to do these things and give me those abilities back.” 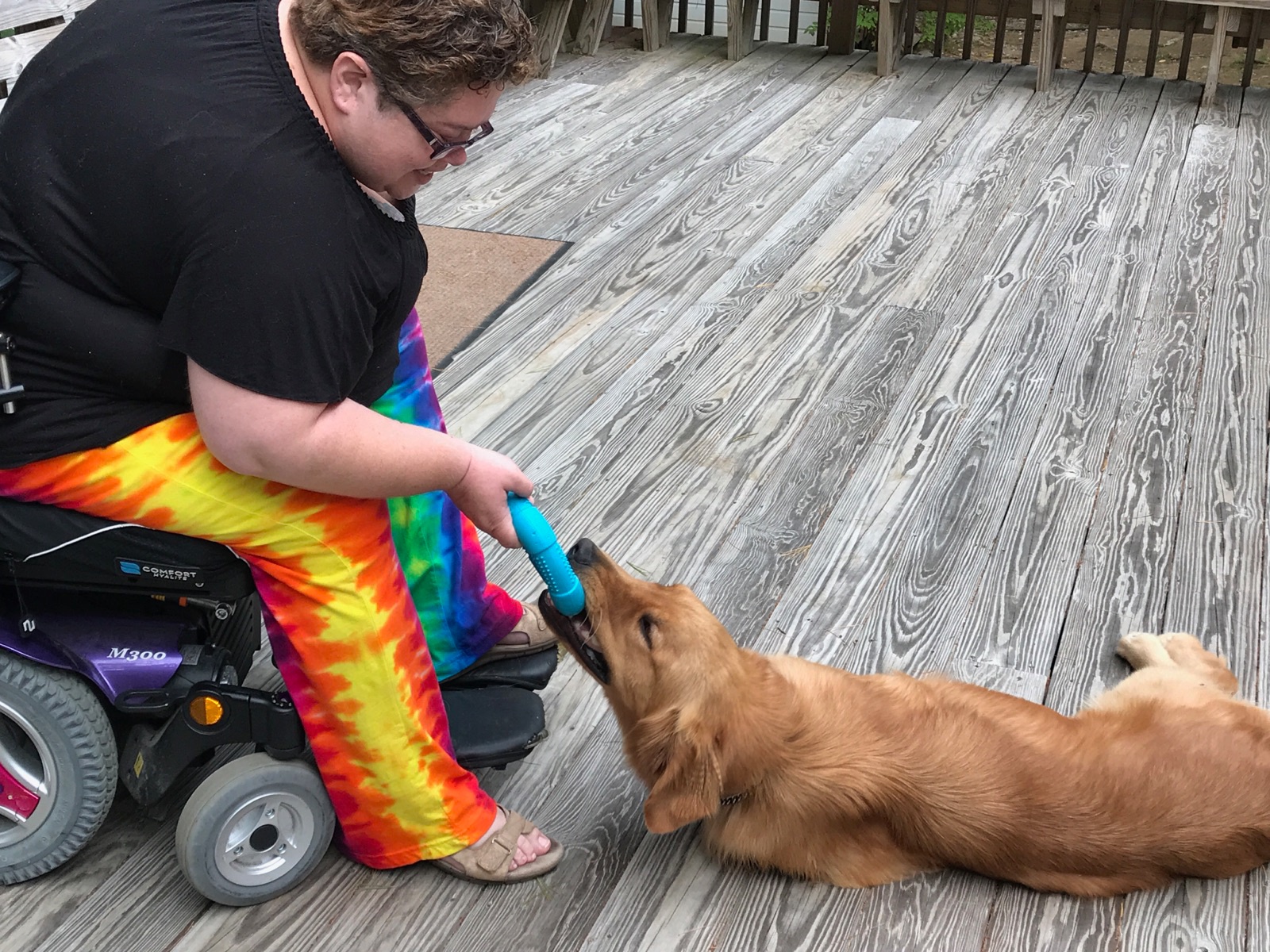 She remembers, while learning to walk up the stairs with Journey, breaking down in tears. She thought of the birthday parties that, due to Lyllyan’s illness,  her daughter hadn’t been able to attend, and realized this dog would open up doors for her daughter, too.

These realizations didn’t impact her alone. Lyllyan recalls the others, now lifelong friends with whom she continues to keep in touch, crying throughout the training process.

“It was emotional to realize that your life was about to change,” she says.

Thanks to Journey, Lyllyan’s life has undergone drastic changes for the better.

“I’ve been able to go back to work. When I drop something in my office, I don’t have to bug a coworker. I can ask [Journey] to pick it up. That gives me a lot of dignity.” She says, “Journey has a ripple effect on my family. They don’t worry if I’m at home by myself. He’s given my daughter the ability to have a typical childhood.”

The experience of being paired with Journey from ECAD has been so impactful as to make Lyllyan into a self-appointed advocate.

“He’s opened my life. He’s opened my world. He’s opened doors for me that I thought were closed,” Lyllyan says. “He’s made me a stronger mom. So please donate. These dogs don’t just bless us, they bless everybody around us … He’s trained to be a mobility dog, and he gives me that. But he also gives me dignity and confidence and self worth. I just feel secure with him beside me. The whole experience is amazing.”

Lyllyan has seen firsthand that donors make a profound difference in the lives of people like her and her family. For this reason, she supports ECAD’s mission to connect more people in need with dogs that redefine what’s possible and enable them to live healthier, happier lives.

“Even if you give just a penny, it goes so much further than you can imagine,” adds Lyllyan. “It extends into so many people’s lives.”